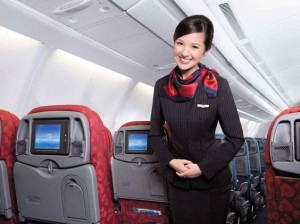 On a flight, a middle-aged, white Lady found herself sitting next to a black man. She called the cabin crew attendant over to complain about her seating.
“How can I help you, Madam?” asked the attendant.
“Can’t you see?” she said, “You’ve sat me next to a black. I can’t possibly sit next to this disgusting human. Find me another seat!”
“Please calm down, Madam.” the attendant replied. “The flight is full today, but I’ll go and check if something can be done.”
The woman cocked a snooty look at the outraged black man beside her and looked away.
A few minutes later the stewardess returned with the good news, which she delivered to the lady.
“Madam, unfortunately, as I suspected, economy is full. I’ve spoken to the cabin services director, and club is also full. However, we do have one seat in first class.”
The lady looked around with a winning grin but before she could have a chance to answer, the stewardess continued…
“It is most extraordinary to make this kind of upgrade, however, and I have had to get special permission from the captain. Thankfully, the captain also felt that it was outrageous that someone should be forced to sit next to such an obnoxious person.”
Having said that, the stewardess turned to the black man sitting next to the lady, and said:
“So if you’d like to get your things, sir, I have your seat ready for you… in the first class.”
The lady’s grin disappeared and, apparently the surrounding passengers stood and gave a standing ovation while the black man walked up to the front of the plane…