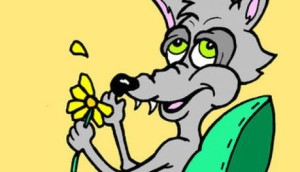 Once upon a time, there was a wolf  who lived in a jungle near a village where a lot  of fruit trees grew. The greedy wolf would always try plucking fruits from the trees but most of the good fruits were so high that he couldn’t reach them. In the village lived an elderly man who owned a lot of fruit trees. But he was so old that he had no way of plucking fruits from his own trees.

One day, the man saw the wolf trying to jump hard to grab the fruits from his trees without much success. So he came up with an idea whereby both of them could benefit. He offered the wolf a ladder to climb up, but in return the wolf would have to give him half of whatever he picked. The greedy wolf happily accepted the offer.

He immediately set to work. He went up and down the ladder, plucking fruits and filling his basket. He would then share them with the man. This went on for a few days. But soon, the greed took over the wolf. He realised that he could eat double the fruit if he stole the ladder. So he thought up a new, secret plan and one day, without telling the man fled with the ladder. Now he went to other areas plucking fruits.

But soon the man realised that he had been cheated so he went looking for the wolf. He found him, grabbed the ladder and beat the wolf black and blue. He gave the wolf such hard whacks that all the fruit came out of the wolf’s stomach.

The man took away the ladder and the wolf was left with no way of plucking the high hung fruits. That day the greedy wolf learned that it was not a good idea to cheat people who partner with you. If he had been honest and not a greedy wolf, he would still have been able to enjoy some delicious fruit.