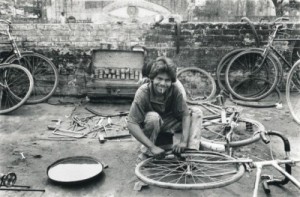 A few days ago I accompanied my 11 yr old son to a small cycle repair shop. The mechanic was busy chatting up with a friend so we waited. The mechanic was a poor, uneducated, under-nourished guy in a dirty vest. He was asking his friend, “Do you know how a steam engine works?” There was a challenge in his voice.

The friend spoke with a false air of confidence and tried to explain the mechanism of the steam engine. But he was way off the mark. The mechanic enjoyed his friend’s predicament and then went on to explain the real functioning. The way he spoke about the steam system, it impressed me. It was a stimulating discussion and there was something intriguing about the way the mechanic spoke.

When he finally paid attention to us and took to our cycle, I asked him where he learnt all about the steam engine. He looked at me and said, “I have been researching the steam engine for a long time and I want to develop a bicycle which runs with a steam engine.”

I was surprised to see a man with an inventor’s spirit at this dirty cycle shop. I probed him further, “You mean a motorized cycle, right? But what will be new in that? Motorcycles are commonly available now.”

“But they run on petrol!” he exclaimed, “I want to end the necessity of petrol from the world. The petrol available on earth will end soon but water will always be there.”

It has been a few days since I met that mechanic but I cannot remove him from my mind. His worldview and ambition makes me think – “We usually do not expect to meet such intellect in places like dirty cycle chops. But there is genius all around us, just waiting to break through.”