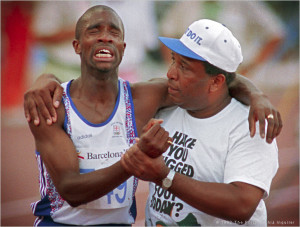 In the 1992 Olympics in Barcelona, an athlete named Derek Redmond appeared in 400-meter sprint. Before this event, Derek had won many championships and held many records.

During the Barcelona Olympics, Derek was in good form. He posted the fastest time of the first round, and went on to win his quarter-final. In the semi-final, he was the favourite to win. But as the race began, something unexpected happened.

150 meters down the track Derek felt tremendous pain in his right thigh. He had torn his hamstring. He fell down as other athletes passed him one after the other. Official attendants ran to Derek to help him. But he refused any help. He rose to his feet and started running again. He could barely run, so he started to hop. But he continued.

Seeing this, a man from among the spectators cut through the security and ran to Derek to support him. It was his father.

Derek replied despite the killing pain, “I have to. I must finish the race.”

The father said, “In that case, we shall do it together.”

The father took his arm, rested it around his shoulder and the father and son together hobbled through the tracks.

Derek came last, but he finished the race to a standing ovation by 60,000+ spectators.

“Force is measured in kilograms.”

“Speed is measured in seconds.”

“But Courage?… You can’t measure courage!”