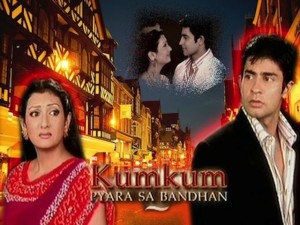 The soap opera tells the tale of the Wadhwa family and its daughter-in-law, Kumkum. She is happily married to Jatin. However, he dies of a brain tumor while she is expecting their first child. The Wadhwas decide to get their young daughter-in-law re-married, and find an eligible young man named Vishal. However, when obstacles arise to prevent that marriage, Jatin’s younger brother Sumit impulsively marries Kumkum in order to save her from social disgrace. After this, Sumit and Kumkum come to the fact that both of them love each other very much and cannot think of living without each other. Kumkum had one son from Jatin. Jatin had one step brother and sister form his step-father. Now that Kumkum notices that her son doesn’t like Sumit, whereas Sumit considers him just like his own son. So Kumkum decides to finish the bitter feeling between them.